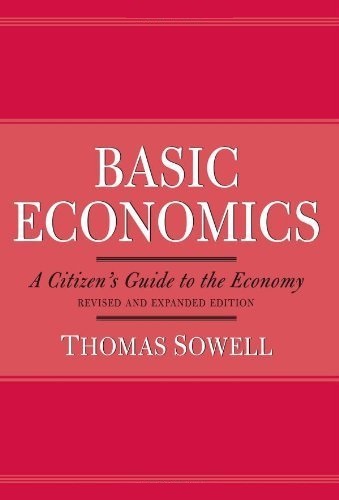 From Basic Economics, the “allocation of scarce resources that have alternate uses”. In part two of this review, I will touch on 3 points out of the last thirteen chapters of the book: resource scarcity, property rights, and trickle down economics. There are a finite amount of resources, such as oil, but we do not know how much oil there is to find.

The cost of finding oil reserves is enormous. An example from the book, which is outdated and does not account for inflation to present day, says that a “major oil exploration venture in the Gulf of Mexico spent … ‘ a total of $200 million’ just to see if there was enough oil to justify continuing further”. If taxes and fees were increased to find the oil, it is less likely that the money would be spent to find that oil. Conversely, if the taxes and fees were lowered, it would be more profitable to search for that oil. In either case, the same amount of oil is in the ground. It is just of difference of money spent and knowledge of the resource.

This is the difference between something being “owned by the people”, and self-ownership. If a farmer owns his property and is paid on the produce that is sold, it’s in the farmers interest to sell a lot of quality produce. That farmer would not ship rotten food next to good food because it would contaminate the whole shipment. However in the Soviet Union since no one owed property or the food produce process, rotten food was often shipped with good food. Everyone was paid the same whether the food was rotten or good. 100% job security with minimal job accountability. When you own your property and products you won’t be working anymore if you ship rotten food.

Thomas Sowell expressly denounces trickle down economics as a valid economic theory. In order to start a business and investment is made first. Then people are paid to do work. The first people that receive money are the workers. Then after surviving a high rate of failure with new businesses, profits to the business may come back. Generally speaking it takes years to reach a profit on a business. The real benefit from reducing taxes on businesses is that it opens the door to make investments sooner in the future. Workers expect to get paid for every day worked, but profits for companies come years after they are started. Trickle down economics is actually exactly the opposite of the rich get paid then money goes to the workers. In reality, worker gets paid then profits might flow in years later.

You can find the book from his website here: https://www.tsowell.com/basicecon_5.html

Posts by them there ‘Categories’

Because bookmarks are for chumps

Maybe revenue this gets?

The newest of the new(s)